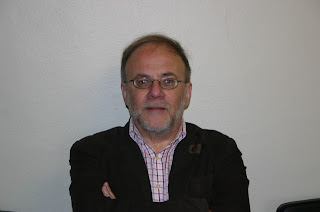 MY COLLEAGUE RICHARD J. BAUCKHAM retires today from his post as Professor of New Testament and Bishop Wardlaw Professor at the University of St. Andrews. For the last four weeks our postgraduate Biblical Studies Seminar has been going through his latest book, Jesus and the Eyewitnesses, with Richard there to comment and address questions. This has been an unparalleled opportunity for both our postgradates and Richard's colleagues in biblical studies. The last session on his book ended just a few minutes ago, and there is a reception in Richard's honor a few minutes from now. Then his colleagues will be taking him to dinner. I will post photos etc. in due course. Meanwhile, here is my tribute to Richard, to be presented at the reception:

Richard Bauckham received his first degree in History at Clare College, Cambridge University. His Ph.D. dissertation, also produced at Cambridge, was on a sixteenth-century theologian named William Fulke. In the 1970s Richard was a Research Fellow at St. John's College in Cambridge and a Lecturer in Theology at the University of Leeds. From 1977-1992 he was a Lecturer and then a Reader in the History of Christian Thought at Manchester University. During this period his research moved steadily into the area of New Testament studies (with related interest in early Jewish studies and non-canonical early Christian literature), although his commitment to theological studies remained strong, as it does to this day. Richard was appointed as Professor of New Testament Studies in the Divinity School of the University of St. Andrews in July of 1992 and he became Bishop Wardlaw Professor in 2000. During his time here he has also been appointed a Fellow of the British Academy and a Fellow of the Royal Society of Edinburgh.

Richard is one of the foremost living New Testament scholars: he has published 17 sole-authored monographs and collections of essays and he has co-written or co-edited numerous other books. He has also published well over 200 articles in journals, books, and reference works. His recent monograph, Jesus and the Eyewitnesses: The Gospels as Eyewitness Testimony is a groundbreaking contribution to the field. It argues that the content of all four of the canonical Gospels is close to the testimony of eyewitnesses; the Gospel of Mark is based on the testimony of Peter; and the Gospel of John was written by the "Beloved Disciple." The book issues a weighty challenge to the whole area of New Testament form criticism and is already having a major impact on the field. It has been called "a characteristic tour de force" by N. T. Wright, "a pioneering work" by Martin Hengel, and (my favorite) a "blockbuster" by Jimmy Dunn. Richard has supervised more than 20 doctoral students to completion during his time here, and has contributed to the supervision of many others. He has also been active throughout his time here in contributing to and encouraging dialogue and cooperation between biblical scholars and theologians. And, to top it off, he is the author of the children's book The MacBears of Bearloch, and I understand that there may be more to come in the series.

Richard is to move to Cambridge soon after his retirement, but he will continue his association with the School of Divinity, not least as one of the principal investigators for the More Old Testament Pseudepigrapha Project. We hope to see him here often in the years to come.

UPDATE (1 November): Here's a report on the evening from the Greek Geek. The sliver of body to the right in the first picture is me. I'll post a report too when I get a chance.

UPDATE (4 November): Fewer of my photos came out than I'd hoped, but here are some for now. I'll try to gather up some more. 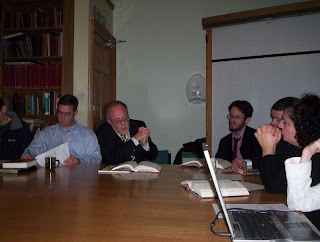 Richard's last (for now) Biblical Studies Seminar at St. Mary's College. We were discussing chapters 14-18 of his book, Jesus and the Eyewitnesses. 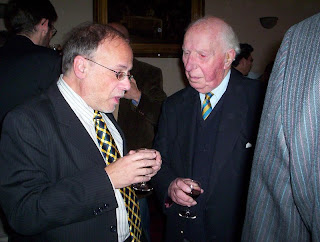 Richard and Professor Emeritus Robin Wilson at the reception for Richard after the seminar. Professor Wilson was last seen on PaleoJudaica in pictures from his 90th birthday party, in February of 2006. At Richard's reception last week, Robin told me that the day after the party he got an e-mail from a friend in New York who already knew all about the event thanks to PaleoJudaica. 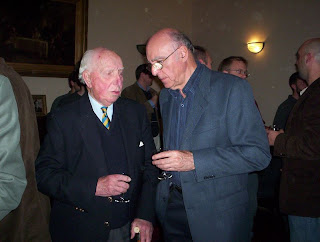 Professor Wilson with Dr. Robin Salters (also retired from and currently an Honorary Reader in the School of Divinity). 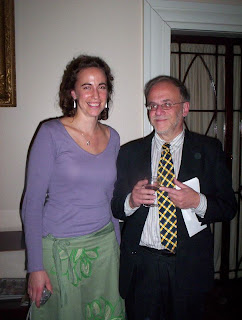 Another photo of Richard with Mariam.
Posted by Jim Davila at 5:38 PM