2 ENOCH: ALL YOUR BASE ARE BELONG TO US*

The fifth Enoch Seminar** in Naples last week was a great success; not because we now understand the book of 2 Enoch -- we don't, but because we understand much better why we don't understand it and what sorts of questions we need to ask to make any progress. I have many pages of minute notes from the numerous sessions, but rather than taking days or weeks to try to digest and summarize them, I will, without further delay, boil down what seem to me to be some of the main points that have come out of this Seminar. The attributions of positions to specific people are my effort to give credit where credit is due. If I have misunderstood anything anyone has said, apologies in advance and I will be happy to make corrections.

I should begin by noting two important presentations on the first evening of the conference. Esther Eshel reported on two new Aramaic fragments of 1 Enoch. These are attributed to Qumran (i.e., are taken to be Dead Sea Scrolls), although they were recovered on the antiquities market and are thus unprovenanced. One is a papyrus fragment containing 1 Enoch 106:19-107:1 (from the story of the birth of Noah). The other is a parchment fragment containing 1 Enoch 7:1-5. Eshel thinks it is part of 4QEnochc ar/4Q204.

The second presentation was by Joost Hagen on the new Coptic fragments of 2 Enoch. A summary of his work on the fragments is here. I won't repeat any more of it except to say that my favorite part of the story was how he identified the work as 2 Enoch. When he deciphered the phrase "and the appearance of the angel was like snow" on one of the Coptic fragments, he entered it into Google. A translation of 2 Enoch in Google Books then told him that the phrase came from 37:1.

The study of 2 Enoch suffers severely from the problem of the lack of a complete edition of all the Slavonic evidence. Grant Macaskill set out to produce a critical edition with an eclectic reconstructed critical text, but has decided this is impossible. He is now finishing a diplomatic edition that will at least collect all the evidence of all the Slavonic manuscripts.

Even so, very few scholars know Slavonic. Of the sixty delegates of this year's Enoch Seminar, only eight were specialists in this language. It is very important that specialists in other pseudepigrapha, Second Temple Judaism, early Christianity, Byzantine studies, etc., open a dialogue with them and keep it open. One of the most important accomplishments of the Naples Enoch Seminar was to have fully opened this dialogue.

At the beginning of the final plenary session Hanan Eshel commented that 2 Enoch is like Melchizedek in the New Testament Epistle to the Hebrews. As he is without mother or father and with no genealogy, so 2 Enoch is without a date, a text, or an origin.

The problem of the short and long recensions of 2 Enoch may not be as simple as it initially looks. We must resist the temptation to place them in binary opposition as though one is "original" and the other "secondary." The truth may be far more complicated. To take just one scenario as an illustration (many more are possible) they could share a common original archetype that each has distorted in its own way. The short recension may have cut parts of the original but preserved the rest of it relatively well. The long recension may have added considerably to the archetype without any (or with much less) cutting. The result would be that the short recension is missing original material while the long recension includes both secondary and original material not in the short recension. And still more complicated scenarios are possible. (The basic point is Michael Stone's, although I have filled out the example.) We urgently need our Slavonic philologists to interrogate the text with the sorts of questions that will help us to start narrowing down the possibilities.

In addition to the problem of text and language, the content itself of 2 Enoch defies all our expectations. It is not obviously Christian: it lacks reference to Jesus and other obvious elements of early Christianity and the exalted picture of Enoch would not sit well with Christian theology. It is not obviously Jewish: it deals with biblical commandments but includes no halakhic development of them (i.e., it makes no attempt to think them through in the context of how they might actually be practiced). And it is not obviously Jewish-Christian, a widely-recognized third way that involves acceptance of Jesus as Messiah (and/or as divine0 along with acceptance of halakhic praxis. 2 Enoch is a new category that fails to fit into any of the boxes we have prepared for it and must be taken entirely on its own terms. (These points are Larry Schiffman's.)

From the various discussions during the conference, it seems to me that if there is a Second Temple-era base to 2 Enoch, the evidence is likely to come from the calendrical material in it, some of which may reflect a Jewish sectarian 364-day calendar. But at present all we can say with confidence is that there was a Greek version (behind the surviving fragments in Slavonic and Coptic) which had its origin sometime between the Second Temple period and the Byzantine period.

Andrei Orlov summed up correctly that even if we had the original manuscript of 2 Enoch in our hands, we still would not be able to understand it at present.


*A very free (perhaps excessively so) paraphrase of a comment by Enoch Seminar organizer Professor Gabriele Boccaccini in his closing address. But accurately expressing the sentiment.

UPDATE (23 August): More here. It seems that the text of 2 Enoch is not in as much doubt as indicated above.

ABOUT THE PERSIAN LANGUAGE is an introductory essay by WIds at the Daily Kos. It discusses the full history of the language. It's not my area, but the part on ancient and Sassanian Persian looks accurate to me. If Iranologists have corrections, drop me a note.
Posted by Jim Davila at 10:21 AM

Email ThisBlogThis!Share to TwitterShare to FacebookShare to Pinterest
LEAVING FOR HOME in a few minutes. Should be back late this evening.
Posted by Jim Davila at 8:00 AM

EIGHT SPECIALISTS IN SLAVONIC PSEUDEPIGRAPHA in the same room at the Enoch Seminar in Naples: 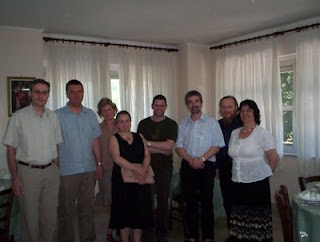 L-R: Alexander Kulik, Andrei Orlov, Liudmila Navtanovich, Florentina Badalanova Geller, Grant Macaskill, Christfried Böttrich, Basil Lourié, Annisava Miltenova
I've been assured that this is not the first time in history that this has happened, but perhaps it's the first time in the West.
Posted by Jim Davila at 6:26 PM

Email ThisBlogThis!Share to TwitterShare to FacebookShare to Pinterest
AN ANCIENT MOSAIC IN LOD is being uncovered and conserved:

JERUSALEM.- Thirteen years after one of the most beautiful mosaics ever to be seen in the country was covered over, the Israel Antiquities Authority, in cooperation with the municipality of Lod and its residents, is beginning an archaeological excavation that will re-expose the mosaic, once and for all. Some 30,000 people from all over the country visited the site during one weekend when the mosaic was on display to the public.

The 1,700 year old mosaic floor, which is one of the most magnificent and largest mosaics ever revealed in Israel, was first uncovered in the city of Lod in 1996. The mosaic is a real archaeological gem and extraordinarily well-preserved. It covers an area of approximately 180 square meters and is composed of colored carpets that depict in detail mammals, birds, fish, a variety of flora and the sailing and merchant ships that were used at the time. The purpose of the building in which the mosaic floor was placed is not known.

THE VIEW FROM MY WINDOW: 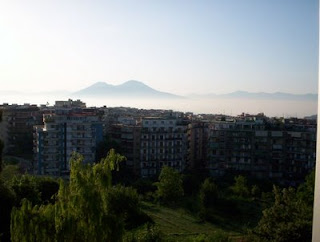 Naples, with Mount Vesuvius in the background, this morning.
Posted by Jim Davila at 8:44 PM

Email ThisBlogThis!Share to TwitterShare to FacebookShare to Pinterest
SLOW NEWS DAY, but here I am ditching a seminar to blog. So, thanks for checking and, for your trouble, I refer you to Manuscript Boy's post on Talmudic Archaeology over at Hagahot.

The conference is going very well and I have pages of notes, but it will be awhile before I can digest them and post some thoughts.

Our excursion to Herculaneum and Vesuvius is this afternoon. I'll post photos when I get a chance.
Posted by Jim Davila at 9:42 AM

THE TORONTO DEAD SEA SCROLLS EXHIBITION at the ROM is, not exactly reviewed, but rather is used as the launching point for a homily by Rabbi Dow Marmur in the Toronto Star. Background here.
Posted by Jim Davila at 1:03 PM

Email ThisBlogThis!Share to TwitterShare to FacebookShare to Pinterest
MORE ON THE NEW KURDISH AND SYRIAC FACULTIES being developed at Artuklu University in Turkey:

The campus will contain a mosque, a Syriac chapel and a small Yezidi temple."Historically, Mardin has been the primary university center of upper Mesopotamia, a city that was home to 13 centers of learning in the 19th century. This tradition of science will live again on our campus," Omay said, adding that the university is a 30-year-old dream come true for Mardin residents.

The rector said they have determined the vision and horizon of Artuklu University as a social-sciences university and are hoping it will grow into an international educational institution, offering courses in languages used in the Middle East. The science and literature faculty will feature Kurdish, Arabic, Persian and Syriac departments.

Omay said they will first emphasize Kurdish and Syriac, languages to which not enough attention has been paid. "Syriac is a language spoken in our region. At the forefront, work is in progress for founding the Kurdish language and literature faculty," he said. "We have completed the preliminary preparations and will apply to the Supreme Board of Education for approval."

The rector added that they will establish the faculty this year after final approval is obtained and that they plan to accept 20 students in 2010. Artuklu University has signed agreements with Dohuk and Kerkük Universities in northern Iraq for Kurdish-language education and with Damascus University in Syria for education in Arabic. In exchange, Artuklu will collaborate with those universities to establish their Turkish language and literature faculties.

Background here. More on the Yazidis here and here.
Posted by Jim Davila at 12:59 PM

DON'T HAVE MUCH TIME, but wanted to update you briefly. Instead of reading papers, I went on a whim with some other attenders to Pompeii and spent a few hours there. The conference started in the evening. Highlights were presentations by Esti Eshel about two new Aramaic fragments of 1 Enoch (found on the antiquities market but attributed to Qumran) and by Joost Hagen on the new Coptic fragments of 2 Enoch. 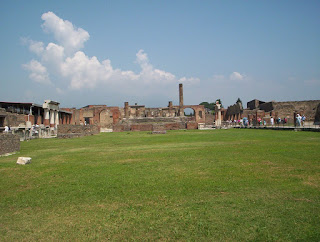 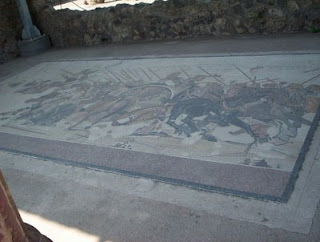 Fresco Mosaic in the "House of the Fawn" 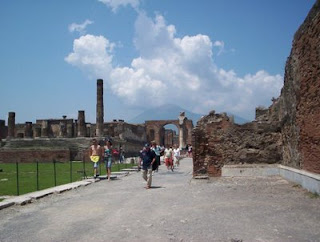 Mount Vesuvius as seen from Pompeii
We'll be going to Herculaneum and Vesuvius on Tuesday.