WE VISITED SOME MUSEUMS in St. Andrews today. I thought I would show you a couple of things we encountered in the St. Andrews Museum in Kinburn Park. Click on the images for a larger version.

First, there's the Kilduncan Stone, a thousand-year-old carved stone containing a scene of sea dragons which may be biblically inspired: 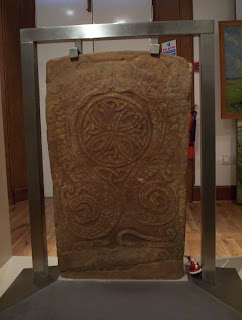 The descriptive plaque is here: 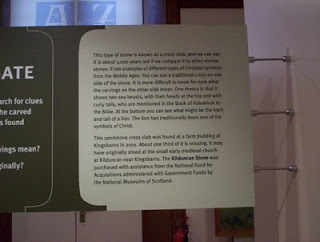 The two beasts are clearly visible on the larger image of the stone. There is no reference to two sea beasts in the Masoretic Text of Habakkuk, but an article by Fife Council Archaeologist Douglas A Speirs in History Scotland Magazine suggests that the scene is inspired by a Latin text of the book:

The reverse side of the stone is even more interesting. Its obscure Christian iconography is difficult to interpret but it is likely that the two sea beasts (known as hippocamps), enclosing the low relief encircled cross-of-arcs, symbolises a passage from the old (Vespasian Psalter) text of the prophet in the Book of Habbakuk, Chapter 3: In medio duorum animalium innotesceris: Between two beasts you will recognise Him [Christ]

The passage is Habakkuk 3:2, which the RSV translates:

You will be known in the midst of two living creatures ...

The LXX adds the word involving "knowing" to the first line as well as keeping it in its original spot in the second line, and it reads its grammar differently than the Hebrew of the MT. Then it misunderstands the Hebrew word "years" to be the graphically identical word "two." It also misreads the word translated "renew it" (literally, "make it live") as "living creatures" or "beasts."

And so, perhaps, we get the two dragons carved on this stone.

(This 1953 article by Leo Jung discusses the convoluted transmission of the line from Habakkuk 3:2 as well as its later use in Nativity apocrypha. [Requires JSTOR access to read.])

Second, here is a banner involving Adam and Eve produced by the Order of Ancient Free Gardeners in the town of Cupar, a few miles from St. Andrews: 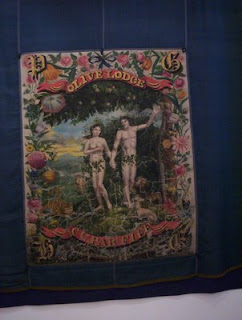 The plaque is here: 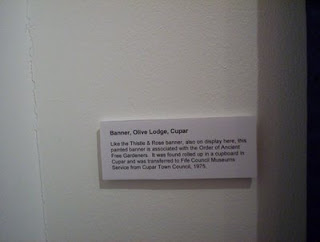 I don't see anything as exegetically exciting in this Lost Scroll of Cupar, but it's a nice banner.
Posted by Jim Davila at 9:20 PM