ANOTHER DURA EUROPOS EXHIBITION IS COMING:

New York University
A private university in the public service 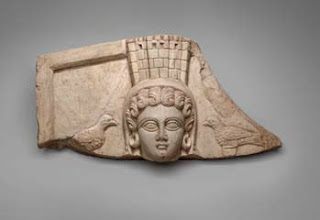 Head of the Goddess Atargatis, or Tyche
with Doves

WHAT Edge of Empires: Pagans, Jews, and Christians at Roman Dura-Europos examines the life and culture of this ancient city (located in present-day eastern Syria), which flourished under the Romans from the mid-second to mid-third century CE. With 77 objects, the exhibition explores the diversity of and interconnections among religions, languages, and peoples that distinguished Dura-Europos.

Strategically located on the Euphrates River, Dura Europos was founded in the fourth century BCE by Macedonian successors of Alexander the Great. However, it was under Parthian control from the late second-century BCE until 164 CE, when the Roman emperor Lucius Verus brought Syria, and thus also Dura Europos, under Roman control. The city then thrived as a military garrison until 256 CE, when it was destroyed by the Sasanian Persians. The cosmopolitan Roman town was exceptionally well preserved, with a wealth of artifacts that, upon their discovery, fundamentally altered our understanding of religious and military practice in the late Roman period.

Highlights of the exhibition include numerous items that demonstrate the coexistence of multiple religions at Dura, with objects from its synagogue—the world’s best-preserved ancient synagogue; a Christian house-church that is older than any surviving church in Rome; and several pagan temples. Also central to Edge of Empires are objects that open a window onto imperial Roman military life and practice, including a spectacular shield and articles of dress that attest to the variety of cultures represented in the Roman military. Dishes, an engagement ring, and other quotidian items, many imported from across a broad swath of the ancient world, attest to Dura’s integration into the economy of the empire and tell us about the daily life of its inhabitants.

WHERE Institute for the Study of the Ancient World (ISAW)
15 East 84th Street, New York City

ADMISSION Admission is free.
ORGANIZATION, The exhibition has been organized by the Yale University Art Gallery and
SPONSORSHIP the McMullen Museum, Boston College. The ISAW presentation has been made possible through the support of the Leon Levy Foundation.
PUBLICATION The exhibition will be supplemented by a 100-page publication containing essays by leading scholars, as well as a map of the region, a detailed site plan of Dura-Europos, archival excavation photos, a checklist of objects in the exhibition, and a selected bibliography. It will be available for purchase at ISAW and distributed by Princeton University Press.
GUIDED TOURS Free guided tours of the exhibition will be offered on Fridays at 6 pm.
INSTITUTE The Institute for the Study of the Ancient World at New York
FOR THE STUDY University was established in 2006 by the Leon Levy Foundation.
OF THE ANCIENT In addition to its doctoral and postdoctoral programs, ISAW engages the
WORLD larger scholarly community and the public with an ongoing program of exhibitions, lectures, and publications.
The Institute for the Study of the Ancient World is located at 15 East 84th Street, New York, NY 10028. Telephone: 212-992-7800; website: www.nyu.edu/isaw
* * *

Much more on Dura Europos here, including links to posts on other museum exhibitions.
Posted by Jim Davila at 9:26 PM