THE TEMPLE MOUNT SIFTING PROJECT: A Potsherd from the Temple Mount with an Incision that Resembles the Temple Menorah. The project is calling for help in identifying the design incised on this potsherd and determining its purpose: 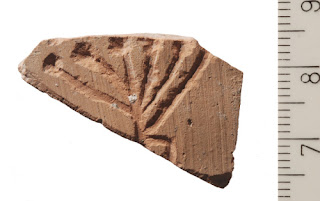 I am not an art historian, but it looks to me as though it could be either a stylized menorah or a stylized palm tree. (If you look at the post above and its comments, you'll see I am not the first to make either suggestion.) The bent line at the bottom right could be the base of the menorah, so that seems more likely. For an example of each, see the photo of the Magdala Stone below. The menorah is on the front of the stone and the palm tree is on the top upper right. Both are known iconographically from the late Second Temple period on into late antiquity. 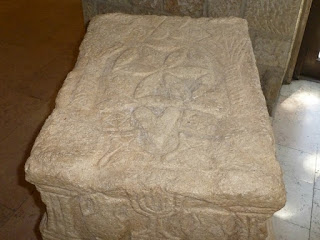 Again, timely. I wonder how long they have been saving this object up for Hanukkah.

UPDATE: Archaeologist and co-director of the Sifting Project, Zachi Dvira, thinks its a menorah and that it was produced in late antiquity.
Posted by Jim Davila at 9:53 AM