AS PROMISED, here is the text of the report on the Symposium which I presented this morning at the Sixth Nangeroni Meeting of the Enoch Seminar in Camaldoli, Italy.

The St. Andrews Symposium for Biblical and Christian Studies met to consider the topic “Divine Sonship” on 6-8 June 2016 at the University of St. Andrews. I was pleased to be able to attend all nine of the plenary sessions and a few of the short papers. Gabriele Boccaccini has asked me to report on the Symposium at this meeting of the Enoch Seminar and I am happy to do so. I should add that I did not know at the time of the Symposium that I would be presenting this report, so I took very few notes there and am relying mostly on my memory and on the handouts provided by most of the presenters. I also took very few photographs, but I will be posting some of them when I upload this report to my blog, PaleoJudaica, after it is presented. [Now done! Click on any of the images in this post to see a larger version.]

I should begin by noting that the St. Andrews Symposium for Biblical and Christian Studies was created solely by the postgraduate students at the Divinity School of the University of St. Andrews some years ago and they have been entirely responsible for organizing and running each symposium. Past symposia have been held on Authoritative Texts and Reception History (2011);, Manuscripts and their Texts: Perspectives on Textual Criticism (2012); Sacred Texts in Their Social-Political Contexts (2013); and Ancient Readers and Their Scriptures (2014). Essays from the first symposium are forthcoming in a conference volume. This year’s combination of numerous papers by postgraduates alongside a stellar cast of senior presenters is characteristic of these symposia and underlines how important and successful they have been.

On to this year’s event. After some brief welcoming comments by one of the organizers on Monday at noon, the Symposium opened with a plenary paper by Richard Bauckham, Emeritus Professor from the University of St. Andrews, on “Jesus’ Use of ‘Father’ and Disuse of ‘Lord.’ This use and disuse seems to be related to the tendency in early Judaism to find euphemisms for the divine name. The second plenary paper was by Dr. Madhavi Nevader, also of the University of St. Andrews, who spoke on “Guys and Gods: Divine Sonship in its Ancient Near Eastern Context.” Dr. Nevader took us through an impressively vast array of evidence for how the concept of divine sonship was understood throughout the ancient Near East: in Mesopotamia, Egypt, the Hittite Empire, and Ugarit, with some attention to how these various influences may or may not have influenced the religion and kingship of ancient Israel. (On Tuesday afternoon, Dr. Nevader also displayed her versatility as a member of a string quartet that gave a concert for the Symposium attenders.) 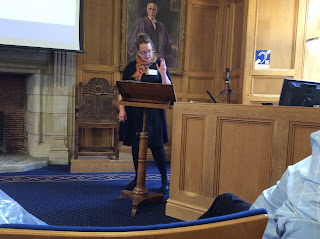 The third plenary paper was by Professor Menachem Kister of the Hebrew University, who spoke on “Son(s) of God: Israel and Jesus.” As the title implies, his paper compared the concept of divine sonship as applied to Jesus, to the early followers of Jesus, and to the people of Israel, citing a vast range of evidence including the New Testament, Second Temple-era Jewish literature, rabbinic texts, Syriac-speaking Christian writers, and even Sa’adia Gaon, and giving attention to the various ways that passages in the Hebrew Bible were deployed by the individual writers to support their theologies of divine sonship. The final plenary paper on Monday was presented by George Brooke, the recently retired Rylands Professor of Biblical Criticism and Exegesis at Manchester University. I had the pleasure of introducing him. He spoke on “Son of God, Sons of God, and the Elect in the Dead Sea Scrolls.” The so-called Son of God text from Qumran, 4Q426 ar featured importantly in his paper. (The “ar” indicates that the text is in Aramaic, but this led to a number of pirate jokes during the course of the Symposium.*) Professor Brooke argued that the positive interpretation of the son of God figure in this text in some sort of messianic sense remains a live option.

On Tuesday the fifth plenary paper was given by Michael Peppard of Fordham University. He spoke on “Son of God in Gentile Contexts (i.e., Almost Everywhere)” and argued for the importance of the emperor cult as background to the divine sonship of Jesus, drawing on an inscription dedicated to Tiberius Caesar from 29 C.E. (IGR III 933 = OGIS 2.583), which treats Tiberius as a god, a son of god, and a high priest, themes important in the New Testament traditions about Jesus. Professor Peppard also called on scholars to develop imaginative scenarios to understand better how, say, a Christian might feel socially compelled to participate in the emperor cult because his brother-in-law invited him to join in as he was passing a sacrifice on the street. The sixth plenary paper was by Dr. Matthew Novenson of the University of Edinburgh, who spoke on “Whose Son is the Messiah?” Unfortunately, I have no notes or handout for this one, but Chris Porter has posted some comments on it. See the link to his second post below.

On Wednesday, the seventh plenary paper was by Professor Reinhard Kratz, of Geoge-Augustin Universittät, Göttingen, who spoke on “Son of God and Son of Man: Reflections on 4Q246 in the Light of Daniel 7 and Psalm 2.” Based on the use of these scriptural passages in 4Q426, he argued for an interpretation of the son of God in the text as an evil figure. 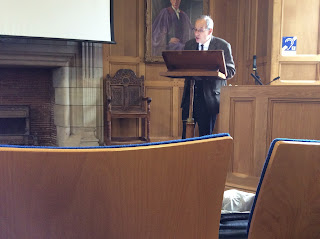 In plenary paper eight, Professor Jan Jooston of Oxford University spoke on “He Boasts that God is His Father: Wisd 2:16-17 between Ps 22:9 and Matt 27:43,” exploring the meaning of the concept of divine sonship in Wisdom in the light of this and other passages and their scriptural backgrounds.

The ninth and final plenary paper was by Professor N. T. Wright of the University of St. Andrews, who spoke on “Son of God and Christian Origins.” He suggested that in early Christianity divine sonship language referred to Israel’s Messiah (but not necessarily as a divine being); Jesus’ followers; and Jesus as the living human embodiment of Israel’s God. The early Christians saw no conflict in these three senses and if we do, it may be our problem, not theirs. He concluded by saying that we scholars are good at analyzing the details of small textual fragments, but we must not forget to step back and look around ourselves at the larger picture. 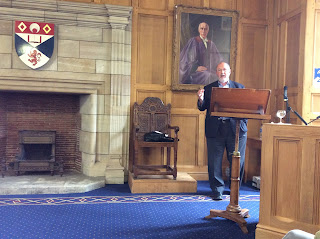 Time does not permit a detailed report on the many short papers delivered in three fourfold parallel sessions on Monday and Tuesday, and I was only able to attend a few of these. Not surprisingly, the Gospels, Paul’s letters, and the Epistle to the Hebrews received a good deal of attention. Second Temple Jewish and related texts were represented by papers involving the Septuagint, Philo of Alexandria, the Hermetica, the Qumran Prayer of Enoch (4Q369) and 4Q Instruction, the Gabriel Revelation, and Pseudo-Philo’s Biblical Antiquities. Applications of cognitive psychology, ritual studies, and the visual culture of Roman depictions of apotheosis brought some interdisciplinary perspectives into the discussion of Paul’s letters. 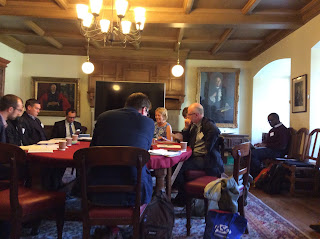 Dr. Sarah Whittle, "Appointed Son of God in Power by his Resurrection from the Dead': Paul, Apotheosis and the Visual Culture of the Empire"

To sum up, let me go back to Tom Wright’s comment about the larger picture. I, and others I talked to, found that the most striking thing we came away with from the Symposium was just how big that picture is. Divine sonship was an important concept across the ancient Near East and the Mediterranean from at least the second millennium B.C.E. to the late Roman era and even beyond. It had many meanings and those meaning shifted from culture to culture, over time, and even synchronically and within individual cultures. This picture provides New Testament scholars with an embarrassment of riches for exploring the background of the subject, but also with an exacting challenge to maintain rigor and proceed with the utmost methodological caution. And it provides scholars in many fields with a wonderful opportunity for interdisciplinary dialogue.

In closing, I want especially to thank the organizers of the 2016 Divine Sonship Symposium, Dr. Garrick Allen and Mr. Paul Sloane — along with the organizers of all the past symposia — for their leadership and also to congratulate them on the contributions these events have made to biblical studies and related fields.

Another report on the St. Andrews Symposium on Divine Sonship has been posted by Chris Porter here and here [and, added later here].

UPDATE: I have corrected a link above and added another.
Posted by Jim Davila at 2:50 PM