RELIGION PROF: Blogs as Havens for those Fleeing Facebook (James McGrath). Professor McGrath is one of the original nine "bibliobloggers," and he is still blogging. His thoughts have weight on the matter. I agree with the following*:

But what is the appropriate response? To attach a narrowing funnel? To thin the herd? Or to find some other method of drinking effectively from such a source? Human beings are currently coping with the literal impact of things that were historically scarce – not only water but food and especially sugars – becoming abundant. And so we need to learn to cope with a shift from scarcity to abundance if we are to survive, in many domains and not just that of information in the internet era. And I think that blogs can likewise play an ongoing role as their place amidst the internet’s deluge of information shifts in the opposite direction, from a role of predominance to a more limited and select set of contributions.

At present one of the greatest challenges to the human race is filtering. Perhaps it is the greatest challenge. How do we deal with the abundance of everything now available to us? Food. Opportunities. And information. How do we individually and as a society confront the vast and growing heap of information before us and winnow out the best quality grain for ourselves without suffocating under the chaff? Choose your filters well!

If you are using Facebook as your main filter, please stop. It is the processed carbs and sugar of information. 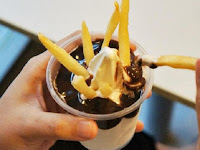 For a list of those original nine (most of whom are still blogging) and other comments on social media and biblical studies, see my blog post What Just Happened, which gives the full text of my November 2010 SBL paper. It was an update to three other contributions I published on the subject in 2005. A brief quote:

If I may hazard more predictions, I expect that these somewhat fragmented and still relatively primitive private media productions will become increasingly powerful, increasingly user-friendly, and increasingly integrated into a personal media expression that is as seamless as the user wishes it to be and that puts into the hands of a private individual the media resources that in the 1980s would have been available only to a major production studio. There is no time here for a proper discussion of the implications this will have for society and individual liberty, but I think they will be largely positive. In a word, the increasingly Orwellian surveillance powers of the State will be to a significant degree neutralized by the ability of billions of individuals to turn those powers back on the State and to shine the glaring light of universal publicity on an ever-increasing portion of its actions. This is already happening.

I predict also that, despite all the new media resources, blogging has found its own niche in the new media – it provides focused discussion that is readable at leisure and ring-fenced for particular purposes – and it will be here to stay at least for quite some time to come.

That was about seven and a half years ago. I think my prophecies have aged well. For a bit more on that, see here and links.

As for blogging, PaleoJudaica continues as ever. To other bibliobloggers who stopped and are starting up again, welcome back! Likewise, welcome to those starting a new blog. If your blog, old or new, is of interest to ancient Judaism, drop me a note and let me know, so I can link to it.

*CLARIFICATION: The quote from James is from his January post on the same topic. Sorry for the confusion.