MY TRIP TO HADRIAN'S WALL AND ITS ROMAN SITES began with Vindolanda, just as my 2006 trip did. 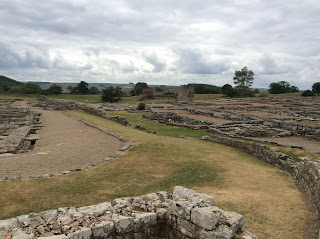 This is a current photo of the site of Vindolanda. If you compare this photo from 2006, you will see that the wooden replica tower on the left has been rebuilt. You can click on this and all the other images to see a larger version. 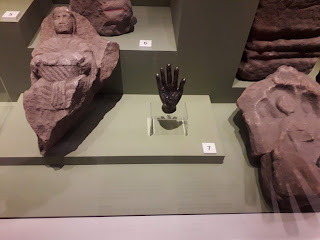 That newly-excavated bronze Hand of Jupiter was on display in the Museum. It was tiny, just a few inches across.

We found one other new thing at Vindolanda, but I'm not going to post on it until later this summer. The reason why will become clear then.

I won't go into detail about Vindolanda here. For a report on my visit there in 2006, see here. Other posts involving Vindolanda, its archaeology, and the extraordinarily important archive of documentary texts excavated there, are here and links, and here, here (on a similar find in London), here, and here. In some of those posts I also discuss some indirect points of contact between the Vindolanda and London texts and the Judean Desert Scrolls etc.

I should also mention the Minimus the Mouse books, for any parents who are looking for an entertaining way to introduce their children to Latin. The books are set in Vindolanda and are based on the epigraphic discoveries there. I went through them with my son when he was a wee lad. I recommend them highly.

On the same day as the current Vindolanda visit, we went to the Roman Army Museum. It is also managed by the Vindolanda Trust. It is situated beside the site of the Carvoran Roman Fort. I don't have any photos of the fort area. The fort pre-dates the Wall and is not directly associated with it. There's not much left visible to the eye, although it has never been properly excavated.

Finally, the next day we visited the Housesteads Roman Fort, which is built directly on the Wall. It is one of fifteen forts built along with the Wall to monitor it. I posted a photo of the fort and Hadrian's Wall here. 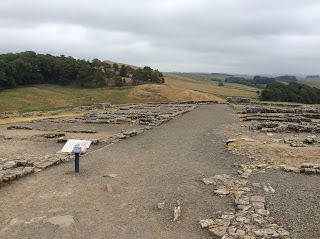 Here is another of the fort. As you can see, the site has been excavated and conserved. This is the barracks for the soldiers. 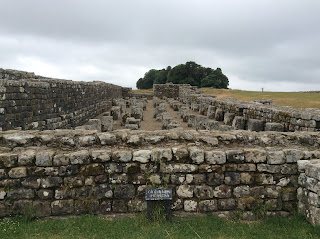 This is a photo of the granaries. 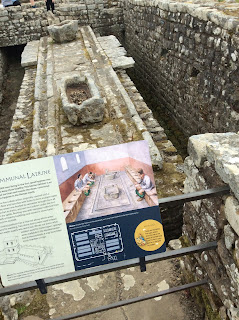 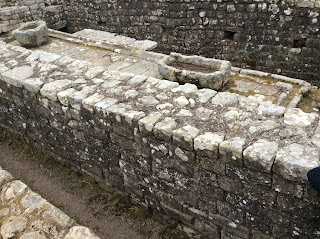 The chief claim to fame of the Housesteads Fort is its ruin of an ancient Roman latrine. It is the oldest and best-preserved toilet in Britain, as recognized by English Heritage. The staff are very proud of it. It is especially popular with school children on field trips. It was hard to get good photos of it, because most of the time it was swarming with said children. But a couple of passable images are above. (An ancient toilet seat was also excavated at Vindolanda several years ago.)

A comparably old toilet was excavated near Qumran. Posts on it are collected here. An even older one was excavated at Lachish. And there's more on ancient toilets here.

There is also a nice museum for the Housesteads site.

I have no expertise in Roman Britain, so this more a question than an observation or suggestion. Are the Carvoran and Housesteads Forts situated in areas where anaerobically-sealed layers of soil are likely to have preserved discarded writings like those at Vindolanda? If so, they could be sitting on archives as significant for ancient British and Roman history as the Dead Sea Scrolls are for Israel. Perhaps someone should organize expeditions to have a look. I know there's no money for that now, but some publicity could probably raise some. Just a thought for you specialists in Roman Britain.

That was this year's trip to Roman sites around Hadrian's Wall. I love the area and I imagine I'll be back. The rest of the holiday was at the Lake District and no ancient ruins were involved.

While we're on the subject of ancient Roman sites in Britain, see also my past post on Roman Chester.