MASADA SYNAGOGUE UPDATE: Reader Todd Bolen in Israel points me to the following photograph of the synagogue, which shows how the interior looked a little over a week ago when he was last there (click on the image for the source). 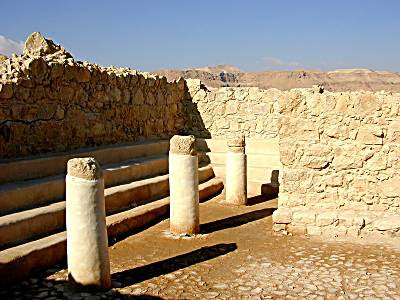 This is how it looked when I was there, about twenty years ago. The Australian article referred to the synagogue as "partially renovated," which it is, but it also quoted Zaka as saying that "an active synagogue on the site was needed," which led me to think that the ruin was being rebuilt into a complete building for modern use. I would have serious reservations about that being done. But if people are just using the ruin for worship (restored, naturally, to the best condition possible considering what's left of it), that's different. I have no objection to that, as long as it's not used so intensively as to wear out what remains. Again, I'd like to know exactly what is going on.
Posted by Jim Davila at 7:39 AM