YOU'LL NOT SEE NOTHING LIKE THE MIGHTY OG: You may recall that early in December I posted on the biblical giant Og, who may appear also as an avenging spirit called "the mighty Og" in a Phoenician inscription from Byblos. Well, there's more. I had forgotten at the time that the Gelasian Decree mentions the lost Book concerning the giant named Ogias who is stated by the heretics to have fought with a dragon after the Flood, which I noted in my first lost books post. It may be that this story conflated the biblical Og with the story of the primordial giant and dragon-slayer Ohyah in the Book of Giants. This is the conclusion of W. B. Henning in an important, but now dated, article on "The Book of the Giants." M. R. James has also discussed the lost Book of Og(ias). Og is a legendary figure in the rabbinic literature too, in which we hear that he survived the Flood and was enslaved by Noah. See the online Jewish Encylopedia article on "Og" for details.

Joe Cathey is considering writing a short story about Og, and I hope he does, but he should be forewarned that it's already has been done. "Aunt Naomi" (Gertrude Landa) published a retelling of Og's story in 1919 as "The Giant of the Flood" in her Jewish Fairy Tales and Legends. It would make a good children's bedtime story. Of course all she had were the biblical and rabbinic legends, so there's ample scope for Joe to give us something that factors in the Book of Ogias and the Phoenician inscription.

As for me, I will be including some of this stuff in the More Old Testament Pseudepigrapha volume, in the listing of Lost Books and probably in the general introduction to the Book of Giants. And aside from MOTP, maybe there's scope for an article on Og too. We'll see.

Meanwhile, here's an illustration from Aunt Naomi's book which shows Og riding a unicorn during the Flood: 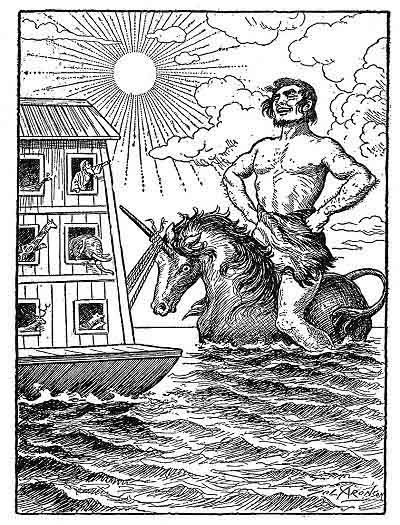 UPDATE (31 December): Joe Cathey reports that he is working on his Og story.
Posted by Jim Davila at 10:05 PM