SMOKE ON THE WATER, FIRE IN THE SKY 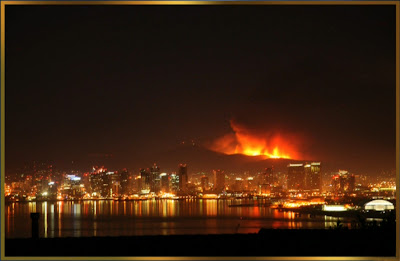 This is a picture of Downtown San Diego during the recent fires, taken from Point Loma. (Click on the image for an enlargement.) Among those skyscrapers are the ones we all will be staying in during the SBL convention, which starts at the end of next week. The Governator did a fine job on the crisis (see below) and the fires are almost entirely contained or out. Still, I'm glad I didn't see this picture at the time. That fire is not nearly as close as it looks, but my mother's house is to the left of the hill and some miles back, too close for comfort. She wasn't evacuated and the fire never really got very near, but one of my friends farther north did have to be evacuated and they thought at the time they were going to lose their house. Luckily, the fire was contained in time.

The photo has been making the rounds via e-mail and it was sent to me by a relative in San Diego. Their source thought it came from the Union-Tribune, but I can't find an online source to link to.

See you soon in San Diego!
Posted by Jim Davila at 9:46 AM