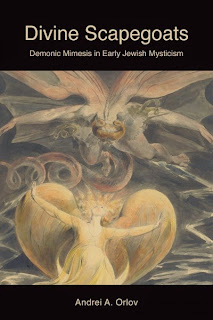 Explores the paradoxical symmetry between the divine and demonic in early Jewish mystical texts.

Divine Scapegoats is a wide-ranging exploration of the parallels between the heavenly and the demonic in early Jewish apocalyptical accounts. In these materials, antagonists often mirror features of angelic figures, and even those of the Deity himself, an inverse correspondence that implies a belief that the demonic realm is maintained by imitating divine reality. Andrei A. Orlov examines the sacerdotal, messianic, and creational aspects of this mimetic imagery, focusing primarily on two texts from the Slavonic pseudepigrapha: 2 Enoch and the Apocalypse of Abraham. These two works are part of a very special cluster of Jewish apocalyptic texts that exhibit features not only of the apocalyptic worldview but also of the symbolic universe of early Jewish mysticism. The Yom Kippur ritual in the Apocalypse of Abraham, the divine light and darkness of 2 Enoch, and the similarity of mimetic motifs to later developments in the Zohar are of particular importance in Orlov’s consideration.