MUCH EARLIER THAN PALEOJUDAICA'S USUAL RANGE, but too interesting not to note. Two separate discoveries of pre-Israelite objects decorated with eight-pointed stars have just been in the news:

Trove of ancient gold, silver discovered at Israeli archeological site. The trove was found in a pot made of china which was wrapped in fabric that was sill somewhat intact (ARIEL WHITMAN, Jerusalem Post).

A treasure trove of gold and silver objects dating back about 3,600 years from the Canaanite period has been found in the Tel Gezer excavation center.

The Israel Antiquities Authority announced Monday that it believes the objects found were part of a ceremonial offering that was laid in the center of the building being excavated.

The remaining two items were significant finds. One was a medallion consisting of a silver disc with an engraving of an eight-pointed star. At the edge of the disc are two horns meant for connecting with a rope. Dr. Irit Tziper recognized these symbols as representing Canaanite gods comparable to Mesopotamia's god's Ishtar and Sin of Akkadian culture. Ishtar is the god of reproduction, love and sex and Sin is the god of the moon. 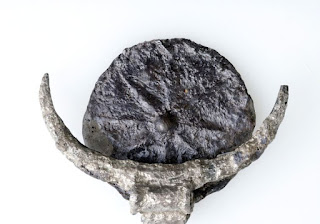 (Medallion consisting of a Silver disc with an engraving of a Eight pointed star. (photo credit:CLARA AMIT/IAA))

For the first time since its discovery in the 1930s, a spectacular, mysterious mural painted on a cave wall in modern-day Jordan some 6,000 years ago — over a millennium before the formation of the first cities or invention of writing — went on display in Jerusalem with little fanfare.

But the Ghassulian Star’s recent removal from the storeroom of the Rockefeller Museum in East Jerusalem, where it has sat since the British Mandate, and its subsequent exhibition, until Sunday, at the Israel Antiquities Authority’s new facilities next to the Israel Museum on the other side of town, violated the IAA’s promise a few months ago not to remove artifacts from the museum.


The magnificent centerpiece was part of a series of cave wall paintings discovered during excavations conducted by the Pontifical Biblical Institute between 1929 and 1938 and in 1959 at Teleilat el-Ghassul, a site just east of the Jordan River, north of the Dead Sea. 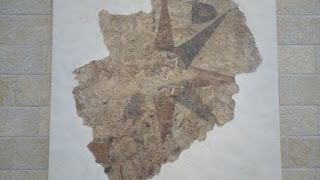 (The Ghassulian Star on exhibit at the Israel Antiquities Authority's new headquarters on November 10, 2016. (Ilan Ben Zion/Times of Israel staff))

Gezer and Teleilat el-Ghassul are not far from each other geographically, but the finds are separated in time by about two-and-a-half millennia. It would be interesting to hear what specialists in the art history of the respective periods made of the similar eight-pointed star designs. My guess is that the similarity is coincidental. It is a fairly obvious design and must have been reinvented many times. But this is far outside my areas of expertise and I don't know. In any case, it is striking to see the two together.
Posted by Jim Davila at 10:56 AM