What is depicted on the carved stone at Capernaum?

LEEN RITMEYER: Is the Ark of the Covenant depicted on a carved stone at Capernaum? Dr. Ritmeyer thinks it represents a wheeled carriage that was transport for the synagogue's Torah scroll.

It has also been argued that the stone depicts the Jerusalem Temple with God's Merkavah chariot. Parallels with the Magdala Stone could point in the latter direction. 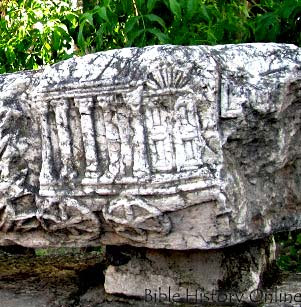 There's more on the ancient synagogue of Capernaum here. And for more on the Magdala Stone, start here (cf. here) and follow the links.