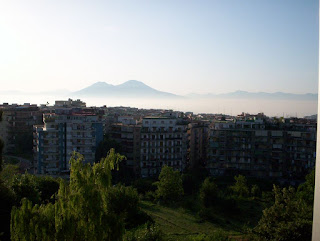 (My photo of Vesuvius from a conference in Naples in 2009)

The volcanic eruption of Mount Vesuvius took place on 24 August in 79 CE. A first-person account of it was published some decades later by Pliny the Younger in two letters to the Roman historian Tacitus. His uncle, Pliny the Elder, led a daring naval rescue mission into the eruption zone. Pliny's intervention may have saved something like 2000 people, the equivalent of about half the total death toll at Pompeii. The Elder Pliny died while doing scientific observations of the eruption.

Some think that a body recovered in a mass grave on the shores of the town of Stabiae is that of Pliny the Elder. I am skeptical, but who knows? That post sums up key developments around the eruption of Vesuvius so far in 2020 and gives links to many earlier posts. A couple of subsequent posts are here and here.