THE JEWISH CHRONICLE: Copied copper scroll is one to treasure (Simon Rocker).

A couple who have made high-quality facsimiles of illustrated medieval manuscipts and even of the Dead Sea Scrolls have embarked on their most difficult challenge yet - to make a replica of the mysterious Copper Scroll.

The 2,000-year-old metal object, discovered in one of the Dead Sea Scroll caves in Qumran in 1952, appears to be a treasure map giving clues to the location of precious artefacts from the Temple in Jerusalem.

After two years of trial and error since beginning their attempt, Michael and Linda Falter of Facsimile Editions, London believe they have at last cracked it.

HT David Meadows. This is an interesting project, but neither the author of the article nor the Falters indicate any awareness that a facsimile of the Copper Scroll already exists. The Copper Scroll was originally opened at the College of Technology in Manchester, by cutting it into strips, a project organized by John Allegro. Regular readers will recall that I was just at the University of Manchester for the annual meeting of the British New Testament Conference. While I was there I learned from Professor George Brooke that Allegro had a facsimile of the Copper Scroll made while it was in Manchester. George brought it by my table during one of the meals and even let me heft it. Photographic proof: 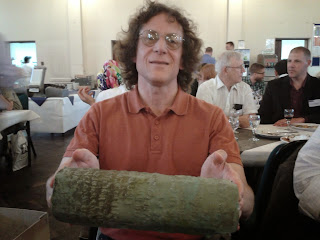 UPDATE (11 September): News of yet another Copper Scroll facsimile here.
Posted by Jim Davila at 11:45 AM