Ancient symbols on the Emblem of the State of Israel

IN HONOR OF ISRAEL INDEPENDENCE DAY: What Are the Weird Scribbles on the State of Israel's Emblem? They look startlingly like dragons and nymphs found at the temple of Apollo in Didyma, with allowances made for Jewish custom (Elon Gilad, Haaretz).

Out of the hundreds of suggestions that arrived, the committee chose a design submitted by the brothers Gabriel and Maxim Shamir: a schematic menorah with seven six-pointed stars over it and an olive branch on each side. But the committee asked the brothers Shamir to make the menorah look more ancient, and to add Israel's name.

The result was the Emblem of the State of Israel, which the government approved on February 10, 1949.

The menorah that the Shamir brothers ultimately used on the symbol was a stylized version of the menorah carved in relief on Titus’ Arch in Rome. The arch was built in 83 CE to mark the victories of the deceased emperor – including the conquest of Jerusalem (Titus himself died in 81 CE).

Simply, those scribbles on the emblem are simplified versions of the ornamentation on the base of the menorah that is depicted on the arch.

And then it gets very complicated, so read the rest if you can access it before it goes behind the subscription wall. This is the emblem: 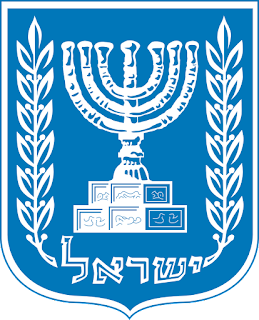 (Public domain photo. Source: Wikipedia. Click on the image for a larger version.)

King Herod may have changed the menorah, or perhaps just its base, after it was damaged or stolen when the Parthians sacked Jerusalem in 40 BCE. Or perhaps, he made the adjustment as part of his reconstruction of the Temple during his reign. We just don’t know.

So it seems that there are good arguments for the menorah on Titus’ Arch and on the Emblem of the State of Israel both being and not being in the Temple. The debate could really only be settled for sure if the menorah itself were to be discovered, but that is unlikely to ever happen. In 410 CE, the Vandals sacked Rome and carried away its treasures. The menorah, which had been sitting in a pagan temple since its arrival in Rome hundreds of years earlier, was probably taken by them, never to be seen again.