A global religious leader, philosopher, award-winning author and moral voice for our time, Rabbi Lord Jonathan Sacks was recently named the winner of the 2016 Templeton Prize.

Rabbi Sacks is currently the Ingeborg and Ira Rennert Global Distinguished Professor of Judaic Thought at New York University and the Kressel and Ephrat Family University Professor of Jewish Thought at Yeshiva University. He is also Professor of Law, Ethics and the Bible at King’s College London. Previously, Rabbi Sacks served as Chief Rabbi of the United Hebrew Congregations of the Commonwealth between September 1991 and September 2013, only the sixth incumbent since the role was formalised in 1845.

The Title of Rabbi Lord Sacks' Lecture is 'Not in God's Name: Confronting Religious Violence'. He was chief rabbi for 30 years and is also the longest-serving person on the BBC’s 'Thought for the Day' programme. He has worked tirelessly to foster good relations and understanding between different faiths. He is this year's Templeton Prize Laureate and is due to be awarded the annual £1.1 million Templeton Prize in London on May 26. 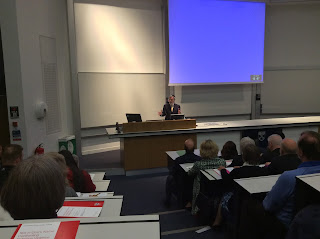 His lecture was based on his recent book with the same title and it included some interesting exegesis of the Book of Genesis, influenced by Freud and René Girard. (My photo. Click on both images for larger versions.) 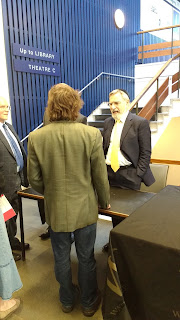 I had the chance to chat with him briefly after the lecture. I'm the one with my back to the camera. Rabbi Sacks is on the right. To the left is Eric Priest, Emeritus Professor of Mathematics and one of the organizers of the event. (Photo courtesy of Sarah Whittle.)

Congratulations to Rabbi Sacks on the Templeton Prize. It was great to have him here.
Posted by Jim Davila at 12:25 PM