HEBREW-INSCRIBED-METAL-CODICES WATCH: A FAKE. I have a reply from Peter Thonemann, which I reproduce below with his permission. Photos now added. The embedded photographs did not come through, probably because I'm working from a computer that does not have Word installed, so I had to open the document with TextEdit.

Lead Codices, or: One Born Every Minute

Over the past few days, you may have seen a spot of press attention about a cache of lead codices ‘from a remote cave in the north of Jordan’, which allegedly have some connection with early Christianity etc.:

On 15 September 2010, I received the following email out of the blue from a certain David Elkington (whose name you will find in all these various news reports) – I’ve edited out only those bits which would reveal the mutual acquaintance:

In relation to a discovery that I have been investigating in the Middle East I was given your email address by a friend […]. I am a biblical historian and specialist in the field of Christian and Hebrew origins.  I'm working with Prof. Philip Davies of Sheffield University and Dr. Margaret Barker on a discovery that I made a few years back of a cache of ancient metal codices. They are comprised of lead and of copper - it is one of the copper codices that brings me to you. We think that it has a possible origin in Alexandria at the beginning of the 1st millennium AD - (the Bedouin who brought them to me said that his father found them in northern Egypt). It has an inscription in Greek along the top. A putative investigation has failed to find the meaning, dialect or type of Greek used and we are seeking to find an expert who might help in determining what it says.
Would you have the time and the knowledge to be able to help?

If you can I would be terribly grateful - I could email you a photograph of the codex as soon as you would like, however I would very much like to discuss it in person if at all possible […].

I look forward to your reply

I replied that I would be delighted to have a look. (Possibly worth noting in passing that in this email, the codices are said to come from “northern Egypt”; in the current press coverage, they are said to come from “a remote arid valley in northern Jordan”.) I received on the 13 October the following three photographs of this ‘copper codex’ from Mr Elkington: 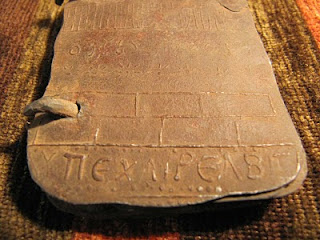 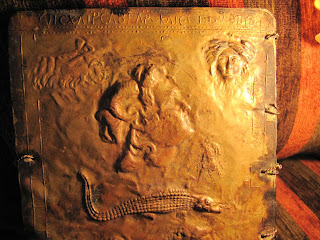 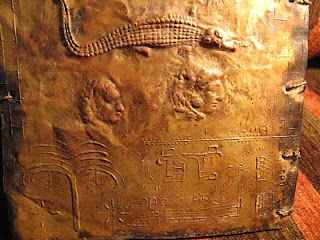 As you will see, the ‘codex’ concerned is identical in fabric and design to the ones being touted on the BBC and elsewhere; the Greek lettering is very similar in style to the ‘Hebrew’ on the codices depicted on the BBC news website. There can be no reasonable doubt that it forms part of the same ‘cache’ from the Jordanian desert (or Egypt, or wherever) – note especially the metal ‘ties’ at the left of the last photograph.

After having a close look at the photos, I replied later that same day:

A surprisingly easy task, as it turns out!

The Greek text at the top of your photo no. 0556 reads: ΛΛΥΠΕΧΛΙΡΕΛΒΓΛΡΟΚΛΙΕΙΣΙΩΝ, followed by ΛΛΥΠΕ in mirror-writing.

The text was incised by someone who did not know the Greek language, since he does not distinguish between the letters lambda and alpha: both are simply represented, in each of the texts, by the shape Λ.

The text literally means 'without grief, farewell! Abgar also known as Eision'. This text, in isolation, is meaningless.

However, this text corresponds precisely to line 2 of the Greek text of a bilingual Aramaic/Greek inscription published by J.T. Milik, Syria 35 (1958) 243-6 no.6 (SEG 20, 494), and republished in P.-L. Gatier, Inscriptions grecques et latines de Syrie XXI: Inscriptions de la Jordanie, 2: Region centrale (Paris 1986), no.118.  That inscription reads, in its entirety, as follows,

’For Selaman, excellent and harmless man, farewell!  Abgar, also known as Eision, son of Monoathos, constructed this tomb for his excellent son (i.e. Selaman), in the third year of the province'.

This is a stone tombstone from Madaba in Jordan, precisely dated to AD 108/9, on display in the Archaeological Museum in Amman.

The text on your bronze tablet, therefore, makes no sense in its own right, but has been extracted unintelligently from another longer text (as if it were inscribed with the words: 't to be that is the question wheth').  The longer text from which it derives is a perfectly ordinary tombstone from Madaba in Jordan which happens to have been on display in the Amman museum for the past fifty years or so.  The text on your bronze tablet is repeated, in part, in three different places, meaningless in each case.

The only possible explanation is that the text on the bronze tablet was copied directly from the inscription in the museum at Amman by someone who did not understand the meaning of the text of the inscription, but was simply looking for a plausible-looking sequence of Greek letters to copy.  He copied that sequence three times, in each case mixing up the letters alpha and lambda.

This particular bronze tablet is, therefore, a modern forgery, produced in Jordan within the last fifty years.  I would stake my career on it.

I'm not able to go to a research library right now to look up the Milik article, but nevertheless the conclusion is clear. At least one of David Elkington's metal codices (a copper one) is a forgery. It seems very unlikely indeed, therefore, that any of them are genuine.

UPDATE: The Christian Science Monitor has an appropriately cautious article that takes the trouble to consult a couple of outside views (of Hershel Shanks and Craig Evans): Could new discovery trump Dead Sea Scrolls? Scholars intrigued but cautious. At this rate the mainstream media may actually catch up with the bloggers in the next few days. I wonder when it will finally occur to journalists to start reading specialist blogs.

UPDATE: The Deseret News cites bloggers and made some effort to check out the story critically: Ancient metal plates found in Middle East. Good for them.

UPDATE: James McGrath also has a good postmortem on the fake-metal-codices story here.