TEMPLE MOUNT WATCH: The IAA has just announced an important scientifically-excavated epigraphic find that likely pertains directly to the ritual life of the Herodian Temple. The fact that it happens to be announced on both Hanukkah and Christmas is, I'm sure, entirely coincidental. Here's the press release (via Joseph Lauer) at a temporary IAA URL:

Exposed- A Find Indicative of the Activity in the Temple

A first of its kind find, indicative of activity in the Temple, was recently discovered:
a tiny item that was probably used as a “voucher” certifying the ritual purity of an object or food in the Temple Mount compound and in the Second Temple


Layers of soil covering the foundations of the Western Wall, c. 15 meters north of the southwestern corner of the Temple Mount, were excavated beneath Robinson’s Arch in archaeological excavations of the Israel Antiquities Authority in the Jerusalem Archaeological Garden. On top of these layers, dating to the first century CE (the late Second Temple period), was paved the Herodian street which was the main road of Jerusalem at that time. From the very start of the excavations in this area the archaeologists decided that all of the soil removed from there would be meticulously sifted (including wet-sifting and thorough sorting of the material remnants left in the sieve). This scientific measure is being done in cooperation with thousands of pupils in the Tzurim Valley National Park, and is underwritten by the Ir David Association. It was during the sieving process that a tiny object of fired clay, the size of a button (c. 2 centimeter in diameter) was discovered. The item is stamped with an Aramaic inscription consisting of two lines – in the upper line "דכא" and below it "ליה". "דכא" or "דכי" in Aramaic means pure. Following the preposition "ל" in the word "ליה" is the shortened form (two of the four letters) for the name of the G-d of Israel.

According to the excavation directors on behalf of the Israel Antiquities Authority, archaeologists Eli Shukron of the IAA and Professor Ronny Reich of the University of Haifa, “The meaning of the inscription is “Pure for G-d”. It seems that the inscribed object was used to mark products or objects that were brought to the Temple, and it was imperative they be ritually pure. This stamped impression is probably the kind referred to in the Mishnah (Tractate Shekalim 5: 1-5) as a "חותם" (seal). To the best of our knowledge, this is the first time that such an object or anything similar to it was discovered in an archaeological excavation and it constitutes direct archaeological evidence of the activity on the Temple Mount and the workings of the Temple during the Second Temple period”.

Tractate Shekalim tells of the administration procedures on the Temple Mount in which our object was used, “Whoever required libations would go to Yohanan who was in charge of the stamps give him [the appropriate amount of] money and would receive a stamp from him in return. He would then go to Ahiyah who was in charge over the libations, give him the stamp and receive the libations from him”. There can be no doubt that this is a very exciting find.

The Mishnah also mentions in Tractate Shekalim, “There were four tokens in the Temple and on them were inscribed; calf, ram, kid and sinner [which were issued as a receipt to those who deposited the appropriate funds]. Ben Azzai says: There were five; and they were inscribed in Aramaic.” Our object does not belong to this group. It shows that not all of the details concerning the administration procedures of the Temple Mount have come to us by way of the rabbinic literature. Here an artifact from an archaeological excavation supplements our knowledge with a previously unknown detail.

It is in this context and the spirit of Hanukkah that the Jerusalem District Archaeologist, Dr. Yuval Baruch, mentioned, “It is written in the Gemara (Talmud Bavli, Tractate Shabbat Chapter 2: Page 21) that the only cruse of oil that was discovered in the Temple after the victory of the Maccabees over the Greeks, “lay with the seal of the High Priest” – that is: the seal indicated that the oil is pure and can be used in the Temple. Remember, this cruse of oil was the basis for the miracle of Hanukkah that managed to keep the menorah lit for eight days”.

In addition to this item, other artifacts dating to the Second Temple period were discovered. Some are even earlier and date to the time of the Hasmoneans, such as oil lamps, ceramic cooking pots and a fusiform juglet that may have contained oils and perfume, as well as coins of the Hasmonean kings, such as Alexander Jannaeus and John Hyrcanus. 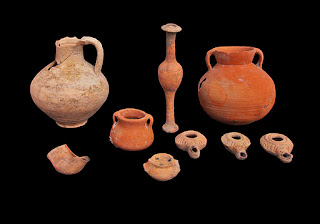 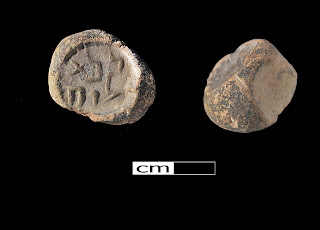 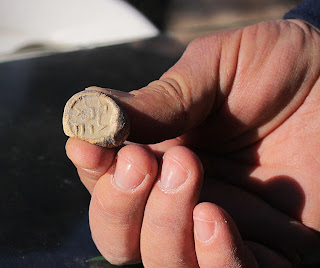 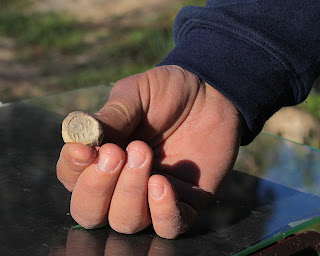 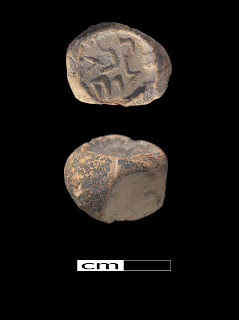