AS I INDICATED IN MY JULY POST ON VINDOLANDA AND HADRIAN'S WALL, I withheld a secret about Vindolanda:

We found one other new thing at Vindolanda, but I'm not going to post on it until later this summer. The reason why will become clear then.

It is time to reveal the secret. Here it is: 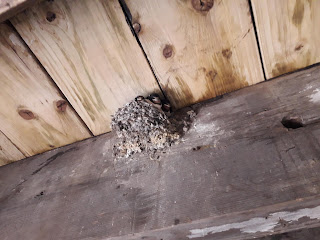 That's right, it's a swallow's nest with baby birds.

Apparently swallows can raise two or three broods in a season, so this may have been round two. The nest was in the rafters of the ground floor of the reconstructed tower. This room has a lot of visitors passing through it. I don't know what the mother bird was thinking when she put it there. I can only conjecture that she built it before the tourist season started up. Once it started, she had her hands (wings?) full. She spent her time flying in and out and around the tower, trying to guard the nest from everything at once. 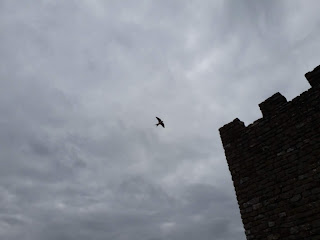 I hope she succeeded. I withheld the photos because I didn't want to draw any additional attention to the nest during the tourist season. But by now all the babies have flown and the family has probably departed on their migration south. I hope she chooses a quieter site next year.

I know what you are wondering. African or European swallows?

It's a trick question. They are migratory birds that spend part of the year in both places. In July they were Europeans. About now they are heading back to Africa.

The nest was the Vindolanda secret. I hope you enjoyed it.