MK Berko and Palestine: a clarification

PHOENICIAN OR PHILISTINE? Regular readers will recall the recent episode in which a speech by the Israeli MK Anat Berko was represented by many of the media to assert something that she did not in fact say. The issue arose because her comments touched on the origin and history of the word "Palestine," a subject that has been of interest to PaleoJudaica.

I also noted a later article in which she too set the record straight. In it she was quoted as saying, "The word 'Palestina' was taken from the biblical Pheonician [sic] people." This is obviously erroneous: the word comes from "Philistine." I corrected the error without commenting on who might responsible for it. Now reader Yoel writes with additional information that shows that she was not the one who made the mistake.

And here's a video of her full speech with English subtitles. 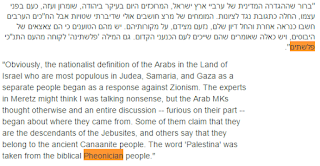 So the media got that one wrong too. I am grateful for the clarification.

Please do watch the whole speech and decide for yourself whether MK Berko's comments deserved the teapot-tempest that the media created from them. The quoted comments begin at 5:17. And notice the sentence that was left out of the quotation in the New York Times: "But there is a Palestinian entity beside us, we don't deny it, we reach our our hands for peace, but nevertheless peace means ..." Then she was interrupted and didn't finish. And contrast this with the headline of the Times's article: "No ‘P’ in Arabic Means No Palestine, Israeli Lawmaker Says." And the article itself asserts that "Anat Berko, a conservative lawmaker from the governing Likud Party, said in Parliament that there could be no such place as Palestine because there is no P in Arabic." To be fair, Newsweek does quote the first clause of the sentence, but most of the other articles also ignore it.

All this makes me think of the famous quotation by the late novelist Michael Crichton about the Gell-Mann Amnesia effect:

“Briefly stated, the Gell-Mann Amnesia effect is as follows. You open the newspaper to an article on some subject you know well. In Murray's case, physics. In mine, show business. You read the article and see the journalist has absolutely no understanding of either the facts or the issues. Often, the article is so wrong it actually presents the story backward—reversing cause and effect. I call these the "wet streets cause rain" stories. Paper's full of them.
In any case, you read with exasperation or amusement the multiple errors in a story, and then turn the page to national or international affairs, and read as if the rest of the newspaper was somehow more accurate about Palestine than the baloney you just read. You turn the page, and forget what you know.”

Nope, the media isn't more accurate about Palestine than they were about that baloney they wrote about your area of expertise. And this story is not just a matter of media error, although that is present. It also involves selective quotation and headlines/summaries slanted to present a narrative at odds with what the quoted person actually said. So let's turn this around. The next time you see something in the media about, oh, anything, especially anything controversial, remember MK Berko and the New York Times and the other media who helped propagate the narrative. Don't believe it until you check out the details for yourself.
Posted by Jim Davila at 11:19 AM